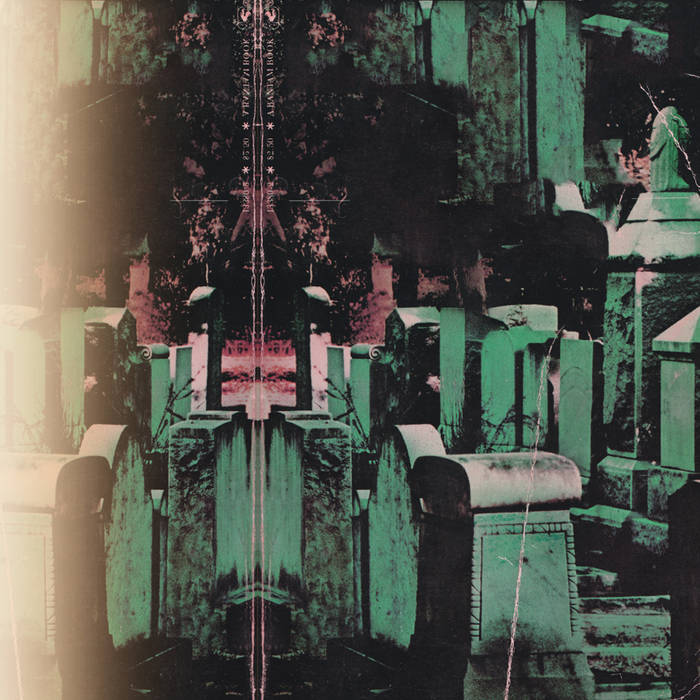 Pleasant Valley is Saskatoon’s Chris Laramee’s debut on Toronto-based tape label Adhesive Sounds as Wasted Cathedral, and it’s my favorite thing so far on the nascent imprint. Top that, you guys! How’re you going to beat favorite? Good luck. But I’m not here to taunt anybody, let alone such nice people. So I’m going to instead opine on how pleasant Pleasant Valley is, and how this quick trip can easily become a much longer one if you turn your stereo on “repeat.” Because if it’s one thing I’ve learned, the most enormous doses possible of good things only make them more good!

So rather than dive right in to the experimental stuff that so lovingly encapsulates the rest of the cassette, Wasted Cathedral begin things with “Munroe and 17th,” which has a distinct early Space Needle, circa Voyager, vibe, but instrumental. There are crazy processed drums, and the beat could fit on a hip hop record! But that’s not all – the keys or guitars or whatever instrument Laramee uses to smear texture and color all over the track do a perfect shoegaze imitation, as if Brad Laner was in the next room and his guitar experiments were bleeding through the wall, leading to a Wasted Cathedral/Medicine collaboration. (This is something I would pay to hear, by the way.)

“Munore and 17th” is a red herring, though – it gives way to the pulsing wads of “We Depart Memphis Moons,” the gateway to the cosmos-facing rest of the record. It’s pulsy and bulbous, like a pulsy and bulbous pulsar, and it gives way to the glittery interstellar musings of the Vangelis-like “Entering Praise, Let Him In,” a cosmic invitation to an entity, or maybe the universe. Who knows? The title track follows on a Caretaker vibe, as if Leyland Kirby stopped by to lend Laramee his dusty old 45s. I had no idea I was going to namedrop Space Needle, Medicine, Vangelis, and the Caretaker in a review of this cassette, but dang it if I’m not over the moon about doing it.

The tape ends on the lengthy “Bloom Diamonds,” all twenty-one minutes of it. Laramee uses it as an exercise in grand sidelong synthesizer meditation, in which clouds of sound formations anchored by a simple keyboard melody end on the most magnificently understated chord structuring possible. This fitting farewell allows the track to flit, Voyager-like (the satellite, not the Space Needle record), past the confines of communicable distance. It’s a moment of clarity – no, Arthur C. Clarke–ian transcendence – where the truth can be immutably glimpsed, and eternity comprehended.

Bet you didn’t see that coming? Well, I’ve warned you – you will become a universal being, evolving into a space child. You won’t even need cassettes, or MP3s, or record labels, or headphones, or anything anymore. So, I guess, thanks a lot Chris Laramee and Adhesive Sounds for essentially stealing music from me. Now if you’ll excuse me, I’m off to see if I can move through time too.


Psychedelic music will always reign supreme for me above all other musics, specifically because of its namesake and literal origin in the idea of fucking with… the psyche. As one stumbles around the Wasted Cathedral, navigating spiral staircases to a rhythmic step, echoing while you tiptoe around a new mental state, sometimes you have to open the vaulted doors to the Pleasant Valley; for sheer mental bliss. Up in your head can be a good place to be, and with tracks like “Munroe and 17th,” “Entering Praise, Let Him In,” and the 23-minute lingerer “Bloom Diamonds,” the Spiritualized quote, “Ladies and Gentlemen We Are Floating in Space” holds true to the form of any and every brain that bears witness to it.

Although, tracks like “We Depart Memphis Moons” and “Pleasant Valley” are less bold in long-form, they still offer the same settling mental stability for the everyday cracked listener. Vibes not only immerse from the new C40 Pleasant Valley, but like an unraveling onion filled with diamonds. Thus, as the reel stretches along, the feeling of peace synchronizes with the listener, and time becomes less of a concern. Like breathing without thinking. Try it sometime. You’re probably doing it right now. Pleasant Valley is good practice: ride the mind! Grab Pleasant Valley on cassette from Toronto tape imprint Adhesive Sounds.


The importance of emotion is often debated in music. Though some would choose not to believe it exists, even if a clean room is created to completely sterilize its impact on the creation thereof, it’s impossible to eliminate. Even if the composer wrote emotionless, the receiver will find some emotion or talisman associated with a particular feeling surrounding the moment or surroundings in which the music was heard. It’s best when an artist embraces the emotion of music if for no other reason than the fun of trying to decipher their state of mind through our own experiences. We put meaning where none was intended. That’s not a problem with Pleasant Valley, eagerly living up to its name with an array of spaced electro-pop. The inherent spirituality at play with Wasted Cathedral is embraced as celestial melodies blossom from inorganic substances. Whatever feelings Chris Laramee planted in these five fugues, they are transparent in only that they exist and to ignore them is folly. This will not end a silly debate but perhaps create a new one where we begin to realize what I project, what you project, and what is projected by Mr. Laramee are all different takes on the same notion. I’m sure I Heart Huckabees made a far more interesting case about connectedness.


Toon Town toiler Chris Laramee of Shooting Guns renown wafts out another late nite smoke ring from his solo-tripper guise. Woozing organs, twinkling synths and strange strings drift under a dense fog of disintegrating drone, but the real side-steps are the blown breaks of opener “Munroe and 17th”. The flip is a sidelong tone-float joined by fellow SK journeyman Chad Munson. Pleasant indeed…